The Rebellion Terminated.. and the Oracles Fell Silent.

Many of you who read my articles have no doubt realized that I am particularly drawn to the history in The Urantia Book. Apart from it being absolutely fascinating, it accomplishes two things for me:

Credibility is perhaps not an issue for a lot of readers, but for me, logic, consistency, and credibility were fundamentals I found lacking in the religious tradition I was raised in. They were in large part what lead me to search elsewhere for answers, and after having found The Urantia Book, what lead me to accept and believe its message.

Have I stopped searching? Absolutely not! For something to be considered worthy of my belief, it must be able to stand up to the most ruthless sincere criticism. Thus, while I am continually studying the Urantia message for a deeper and more profound understanding, I am also reading a great deal of other literature to keep myself as well informed as possible.

As much as The Urantia Book tells us about our history, digging into it more and more, I realize just how much we haven’t been told. This isn’t a complaint per se; I have come to the conclusion that the Authors have told us just enough to give us direction, and to allow us the exercise of greater discernment over fact and fiction in the historical record. It is still up to us to do the work of connecting it all. (There is some inspiring work in this area documented on firstlegend.info )

What I find particularly lacking in the Urantia account is detail on the 150,000 year period between the Caligastia betrayal and the arrival of Adam and Eve. I have my theories as to why this is so, nonetheless, there are a lot of unanswered questions regarding what happened during this period, and I find myself drawn to finding out as much as I can about questions such as: what kind of civilization did Caligatia and the rebels try to build? – knowing more about what they tried to do would go a long way towards identifying those elements in our own civilization that either shouldn’t be there, or have been maliciously distorted; what exactly did the rebels do for the several millennia after their plans collapsed; and the question most concerning this article: once the rebel staff members died, how was Caligastia able to continue to exert his will over the human races and control them?

I found an intriguing answer to this question in a book written by Timothy Wyllie called Confessions of a Rebel Angel. I’m not going to argue the validity of the information in his book- I have several big problems with the historical account of the rebel angel- but the intriguing part for me is how the angel says that Caligastia exerted his control over the human races: he did so through primary midwayers who communicated his directives through oracles.

Think about that for a minute. I have been thinking about it for several months now. It makes a lot of sense! We know quite a bit about the enormous influence that oracles exerted over rulers in the ancient world. The rebel primary midwayers make excelent candidates for the “daemons” who the oracles purpotedly communicated with, and this whole set up is the only way I can imagine that Caligastia would be able to continually influence and shape entire civilisations once his direct connections to the races had died.

So why am I writing about this now? Well, until recently it was just a theory, but at study group this week, one of our members made me aware of some of Plutarch’s lesser known writings. 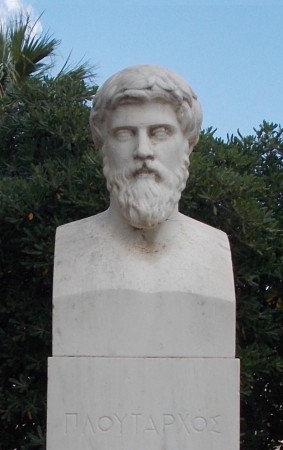 Plutarch was a Greek historian, biographer, and essayist who lived in the first century AD, and is primarily known for his works, Parrallel Lives, and Moralia. He also served as the senior of two priests at the temple of Apollo in Delphi- the site of the Delphic Oracle, and was therefore in a unique position of authority to participate in and record a meeting with a group of prominent Greek thinkers who had gathered to discuss a crisis of the oracles- it seems that they had fallen silent. His record takes the form of a dialogue entitled, On the Cessation of Oracles (De Defectu Oraculorum).

According to popular scholarship, the cessation of the oracles is attributed to the decline of the Greek influence and religion and the rise of Rome. Benno Zuiddam, in a paper written for the Society of Biblical Literature regarding his examination of De Defectu Oraculorum, suggests that this explanation is not sufficient to satisfactorily explain Plutarch’s view on the crisis. Plutarch’s explanation is decidely religious in nature. I agree with Zuiddam, and in the light of The Urantia Book‘s account of Michael’s bestowal, Plutarch seems pretty much right on the money.

We are told in The Urantia Book that in conjunction with Michael’s termination of the Lucifer Rebellion, all rebels were rounded up and removed from the planet (save Caligastia). This occurred exactly in the timeframe Plutarch asserts that the oracles ceased.

So why is this important to Urantia Book students?  Well, the removal of all rebels from the planet is something that is not easily reconciled by some readers.  The continued proliferation of stories of demonic possession, and a wide variety of similar, as yet unexplained phenomenon would suggest that perhaps not all the rebels have been removed.  The alarm of Plutarch and his contemporaries at just the time we are told that the rebels were indeed removed is a welcome corroboration.

It is also interesting to note that even though the oracles had “fallen silent”, many ordinary people persisted in seeking them out for decades to follow. It took several centuries for them to decline into full obscurity. Tradition is not broken easily and the power of the mind to project meaning and perhaps the phenomena themselves is a very real possibility.

Realizing the connection between the cessation of the oracles and the termination of the Lucifer Rebellion isn’t a huge revelation; it may not change your life, but sometimes a large number of little corroborations goes much further than one huge one.  In the last few years of really digging into The Urantia Book– doing the hard work- I have been rewarded many times by these little synchronicities.  They keep me motivated and hungry for more.  If you find yourself interested in more, I would suggest the following two websites as your starting point: